The Habano is a symbol of tradition and exclusivity and its history has always been very closely tied to the city from which it takes its name, Havana.

Habanos, S.A. pays special tribute to the 500th anniversary of Havana, dedicating the welcome evening event to the city and to the San Cristóbal de La Habana brand, which is also celebrating its 20th anniversary
Havana is celebrating its 500th anniversary this year, and the history of the , a symbol of tradition and exclusivity, is closely tied to this city, from which it takes its name. The history of the Habano extends all over the Cuban capital and its footprint is felt in several places around the city.

The Tobacco Museum (Museo del Tabaco) in the historic centre of Old Havana is an institution in constant motion. It not only captures the history of this product with Protected Designation of Origin; here visitors can also find everything related to the ritual enjoyed by good Habanos smokers. Another representation of Habanos in Havana, is the San Cristóbal de La Habana brand. Its vitola, Prado, owes its name to an emblematic avenue in the city – the boulevard that best preserves and recounts the history and splendour of the architecture of the Cuban capital. The Paseo del Prado is home to well-known buildings, and among the highlights are the Gran Teatro de La Habana, inaugurated in 1838, and Havana’s Capitol, built in 1929, and regarded as one of the six most important palaces in the world.

Other symbols directly related to the Habano are the emblematic tobacco factories, where Cuban cigar rollers make each Habano Totalmente a Mano con Tripa Larga – Totally Handmade with Long Filler in the most traditional way: the Real Fábrica de Tabacos Partagás, located in central Havana, is one of the oldest and most popular tobacco factories in the city. The Fábrica de Tabaco Torcido El Laguito is known as one of the most exclusive and most reserved factories for visitors. Lastly, the Real Fábrica de Tabaco Torcido La Corona is famous for being one of the most unique and prominent buildings in Cuba, thanks to its frame of iron and steel.

In order to pay tribute to the city, during the International Seminar, the Festival will dedicate a Master Lecture to the 500th anniversary of the city of Havana and its connection to the Habano, given by Dr. Eusebio Leal Spengler, Historian of the city of Havana. Also, this edition will see the presentation of an exclusive production of 500 humidors of San Cristóbal de La Habana 1519 (57 ring gauge x 170 mm length), specially designed to commemorate the anniversary of the city.

Habanos, S.A. has also paid special tribute to the five centuries of Havana, this year dedicating the welcome evening event to the city, as well as to the San Cristóbal de La Habana brand, which is celebrating 20 years since its creation. On this occasion the event took place in the Antiguo Almacén de la Madera y el Tabaco in the city’s port, with the welcome evening offering a variety of performances from renowned artists that enlivened the night.

markets 27 Premium brands produced (Totally Handmade) and covered by the Protected Appellations of Origin (A.O.P.), including Cohiba, Montecristo, Romeo y Julieta, Partagás, Hoyo de Monterrey and H. Upmann, among others. Habanos cigars have been made Totalmente a Mano (Totally Handmade) for more than 200 years, and since the beginning have been a benchmark for quality all over the world. 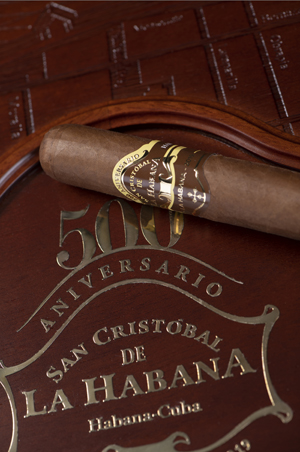 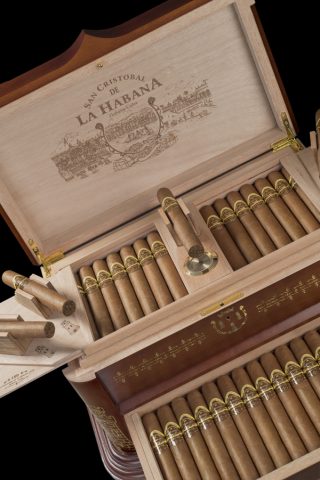